A browser ritual made in HTML5

This game offers an optional 40% discount for anyone experiencing marginalization due to race, sex, queerness, disability, religion, or poverty. Absolutely no questions asked. Click Here to opt in.

Journey into the world beyond the rift . . .

It is a futile game we play. It won't bring our friends home. But perhaps it can give us a little peace, to imagine that their struggles end with a small measure of hope.

To our friends beyond the rift, these words are for you.

It has been centuries since the end of the Endless War, when the Grey Mage destroyed the dragons and tore the city of Tower in half. The part that remains in our world stands as a reminder of the cost that was paid for peace. What happened to the other half of Tower is a mystery. The ritual game, Beyond the Rift, is a way for those in the world of Mnemonic to imagine what life might be like for those trapped on the other side of the Rift.

Beyond the Rift is a tabletop game for 1 to 3 players, which can be played together in the same place or remotely over Discord, Skype, FaceTime, or even text messages. Each player is responsible for one aspect of play, from creating the world beyond the rift, to describing its dangers, to overcoming those dangers and finding resolution for the city of Tower.

The style of play is meant to model the journey of metroidvania video games like Hollow Knight. The world is developed as you explore, with mysteries being solved in your group's descriptions of them. Unlike most metroidvania games, however, Beyond the Rift doesn't ask you to spend hours backtracking through areas you've already explored, or trying again and again to defeat a challenging boss fight. Instead, you'll roll once to determine what the Echo's efforts look like in the story: do they overcome the obstacle in front of them with ease? Or do they have to try over and over again before they finally succeed?

If you want to know more about the world where Beyond the Rift takes place, the ritual's full content also includes a Setting Guide that sheds light on some of the more interesting parts of the setting. You are welcome to use or ignore any of it to suit your group's needs.

What do I need to play?

Beyond the Rift is designed to be fully playable with anywhere from one to three players, and no two players are required to share the same play materials, making this a perfect game to play remotely. You can also play it as a solo experience.

To play, you will need:

The full game is expected to take between one and several hours, but your group can pause play at any time. When you set the game aside, the Weaver in your group will want to make sure that any cards that have already been played remain separate from the deck, to ensure that the same cards aren't played more than once.

Support this ritual at or above a special price point to receive something exclusive.

Each copy you buy helps someone else grab a free copy if their budget doesn't enable them to pay the listed price. If you're unable to budget for a copy of Beyond the Rift priced as listed, please claim one of these free copies, no questions asked.

Someone mentioned that the game can get monotonous after a bit if you draw a lot of numbered cards in a row, and that's extremely true. I don't have the bandwidth to add this to the rules in any formal way, but my recommendation would be this:

Before shuffling at the start of the game, remove from the deck all of the numbered cards from 6 to 10.

That reduces the size of the deck significantly (by about 20 cards), and also increases the proportion of faced cards compared to numbered cards.

If you don't want the numbered cards at all you can remove all of them. I hope that helps!

One of the reasons I didn't make this change in the revised rules is that it adds time to setup, and I wanted to make the game as low-impact to start as possible.

Another option is, once you get the Relic for a region, instead of rolling an extra die, you don't have to roll at all, with the following prompt:

- The relic you found helps you overcome the obstacles with ease. How do you use it?

Special thank-you to the person who left that review! It was very helpful feedback.

Head's up: This game was my gateway into Solo & Solo Compatible RPGs.

It holds a special place in my heart because of that & I HIGHLY recommend folks get this game.

The way I screamed in my living room when I saw a email that said "Beyond the Rift v2.0" in my inbox, though. You have no idea.

I'm so beyond excited to dig into this!! Back once more into the world of Mnemonic we go.

Soooo....I go do download my game and im not sure what this is? I feel like im missing something...is there a PDF to use?

There should be a button to “Run Ritual” that opens the book in your browser.

oh so there isn’t a pdf version? Cool cool.

Yep! I'll check the description to make sure that's clear. Thanks for commenting!

Hey, this is a very long time later, but there's now a PDF version available! 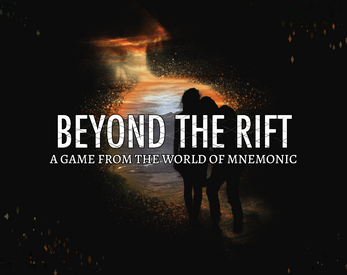